Suffering From Algae Overload? First things first – what type of Algae are you dealing with?

Believe it or not – kelp, seaweed, and pond scum are all different types of pond and lake algae. “Algae” are a type of protist that has plant-like characteristics and are often found in aquatic environments. Algae, like most aquatic plants, are eukaryotic organisms containing chloroplasts and are able to produce photosynthesis.

Algae, like animals, have centrioles and flagella and can feed on organic material within their habitat.

Algae vary in size from one cell up to a really large multi-cellular species. They are also able to live in diverse environments including on moist rocks as well as wet soil, freshwater, and saltwater. Large algae are usually called simple aquatic plants. In contrast to higher plants and angiosperms, algae do not have vascular tissue or flowers, leaves, stems, or roots.

Pond algae can be primary products and serve as the food chain foundation within aquatic environments. Also, algae are a source of food for numerous marine organisms including krill and brine shrimp, which are then the nutritional basis for other types of marine animals.

Is your pond or lake suffering from toxic algae? Contact Lake Management Inc to schedule a free quote.

Algae is able to reproduce asexually, sexually or through a combination of both of these processes by the alternation of generations. The kinds of algae that reproduce asexually naturally divide (single-celled organisms) or spores are released which can be non-motile or motile.

The types of algae that reproduce sexually usually are induced to make gametes whenever certain types of environmental stimuli become unfavorable, including nutrients, salinity, and temperature. These species of algae produced zygote or a fertilized egg to produce either a dormant zygospore that activates when there are favorable environmental stimuli or makes a new organism.

There are seven major types of lake and pond algae categories, with each having distinct colors, functions, and sizes. The seven different divisions include the following: 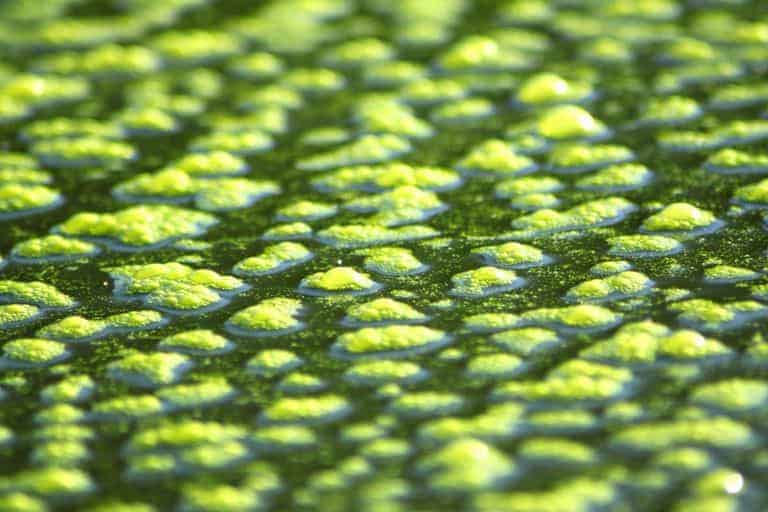 The least prolific algae species are yellow-green algae and have just 450-650 species. These are unicellular organisms that have cell walls that are made out of silica and cellulose. For motion, they have one or two flagella. Their chloroplasts are lacking a certain pigment, and that causes them to have a lighter colored appearance. Usually, the form into small colonies and have just a couple of cells. Typically, yellow-green algae live in freshwater. However, they can also be found in wet soil and saltwater environments. Macrocystis pyrifera (Giant kelp) is a kind of brown algae that resides within underwater kelp forests. Brown algae are some of the largest algae species and consist of varieties of kelp and seaweed that reside in marine environments. The species possess differentiated tissues, which include tissues that produce gametes and spores, photosynthetic organs, a talk, air pockets to help with buoyancy, and an anchoring organ. These protists have a life cycle that involves the alternation of generations. Giant kelp (grows to 100 meters long), rockweed, and sargassum weed are all types of brown algae. Red algae often can be found within tropical marine environments. These eukaryotic cells, unlike other types of algae, are lacking in centrioles and flagella. Red algae tend to grow on solid types of surfaces such as tropical reefs or attaches to other types of algae. The cell walls of red algae are made of cellulose and numerous kinds of carbohydrates. This type of algae reproduces asexually via mono-spores (spherical, walled cells that do not have flagella). These mono-spores are carried by currents of water until they germinate. Red algae reproduce asexually as well and undergo alternation of generations. Several different types of seaweed are formed by red algae. Green algae mainly reside in freshwater environments. However, there are a couple of species that live in the ocean. Green algae, like fire algae, have cell walls as well that are made out of cellulose. There are some species that have one or two flagella. Also, green algae undergo photosynthesis and contain chloroplasts. There are thousands of multi-cellular and unicellular species of this type of algae. Usually, multi-cellular species group in colonies that range in size from just four cells up to several thousand. For the purpose of reproduction, non-motile aplanospores are produced by some species. They depend on water currents to transport them. Zoospores are produced by others. They have one flagellum that can swim to an environment that is more favorable. Some of the different kinds of green algae include dead man’s fingers horsehair algae, and sea lettuce.

Netrium desmid is a type of unicellular green algae that grows in filamentous, long colonies. Mostly they are found in freshwater, but also can grow in snow and saltwater. They have a homogenous cell wall and a distinct symmetrical structure. Fire algae are a type of unicellular algae that are often found in oceans as well as some sources of freshwater. For motion, they use flagella. There are two different classes: cryptomonads and dinoflagellates. A phenomenon referred to as red tide is caused by dinoflagellates. Their abundance causes the ocean to appear red. Some Pyrrophyta species, like some fungi, are bio-luminescent. At night, they make the ocean look like it is on fire. Dinoflagellates also are poisonous, due to producing a neurotoxin that may disrupt the proper function of muscles in humans as well as other types of organisms.  Cryptomonads are very similar to Dinoflagellates. They might produce algal blooms that are harmful and cause the water to look dark brown or red. Diatoms and golden-brown algae are the kinds of unicellular algae that are the most abundant. They account for about 100,000 different species. They both can be found in saltwater and freshwater environments. Compared to golden-brown algae, diatoms are a lot more common and are comprised of many kinds of plankton living in the ocean. Diatoms, instead of having a cell wall, have a silica shell that encases them, which is called a frustule. It varies in structure and shape depending on what species it is. Although golden-brown algae are fewer in number, in terms of productivity, they rival diatoms within the ocean. Usually, they are called nanoplankton and have cells with a diameter of just 50 micrometers. 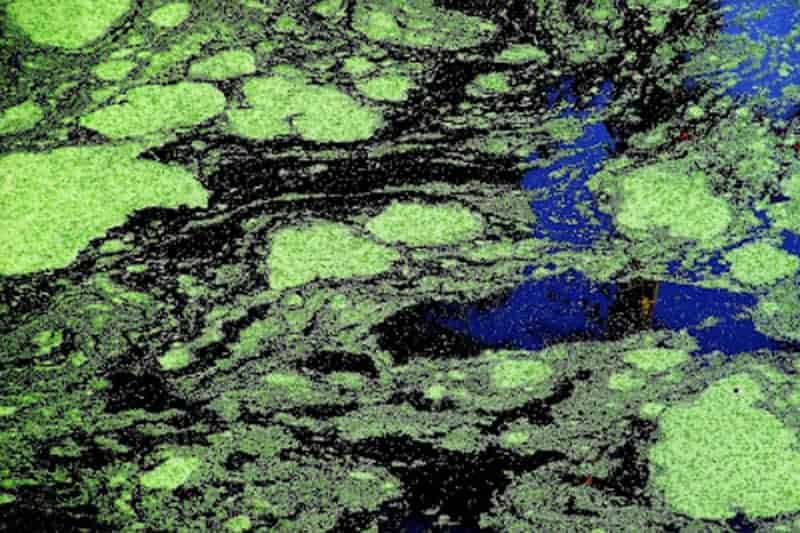 Euglena are both saltwater and freshwater protists. Some euglenoids, like plant cells, are autotrophic. They have chloroplasts that can produce photosynthesis. They do not have a cell wall but are covered instead by a pellicle, which is a protein-rich layer. Other euglenoids, like animal cells, are heterotrophic. They consume unicellular organisms and carbon-rich material contained in the water. Some euglenoids are able to survive in darkness for a while as long as there is suitable organic material for them. Some of the major characteristics that photosynthetic euglenoids exhibit include organelles (vacuole, chloroplasts, and nucleus), flagella, and an eyespot.

Algae are a type of protist that has characteristics that are similar to those of plants. Aquatic environments are where they are most commonly found.

There are seven main types of algae, and they each have their own distinct characteristics.

The least common algae species are Xanthophyta (Yellow-green algae). They are single-celled and their cell walls are made up of both silica and cellulose.

Paeophyta (Brown algae) are some of the largest species of algae. Examples include kelp and seaweed. The brown algae (Phaeophyta) are mostly filamentous or thalloid algae, which, as a group, are almost exclusively marine. Only a few genera of this large, primitive group are represented in fresh-water; those that are found in fresh-water are attached to substrata, such as rocks.

Rhodophyta (Red algae) mainly reside in tropical marine environments. Unlike other kinds of algae, the eukaryotic cells don’t have centrioles or flagella.

Chlorophyta (Green algae) normally resides in freshwater. They are photosynthetic and have cell walls that are made out of cellulose.

Pyrrophyta (Fire algae) is a type of single-celled algae. This type of algae lives in both freshwater and the oceans. To move around, they use flagella.

Chrysophyta (Diatoms and Golden-brown algae) are the most abundant kinds of single-celled algae (there are around 100,000 different species). Chrysophytes are a group of algae commonly found in lakes and large ponds. They are sometimes referred to as golden-brown algae due to their coloration from specific photosynthetic pigments.

Euglenophyta (Euglenoids) are saltwater and freshwater protist. Some are heterotrophic while others are autotrophic. Also known as the “Rocky Mountain Lake” algae.

Wetland Algae Management  Algae or alga (singular) is a catch-all casual term to describe a broad and diverse range of organisms that are not all necessarily closely related. For example,… Maintaining control over pond weeds can be a challenging task.  The first step to finding a suitable solution is the correct identification of the specific weed.  The majority of ponds… Naturally Organic Ways To Keep Your Pond Free From Algae Algae are aquatic microorganisms that are naturally attracted to water sources, and especially standing water. It is, for this reason,…

What is Pond Algae, and Is It Bad For My Pond? Algae is a term used for a diverse group of organisms similar to plants. These organisms exist largely in…